An IMM-Permanent Resident : A comedy infused with Bollywood elements @ The Theatre Centre, April 12-19, 2020 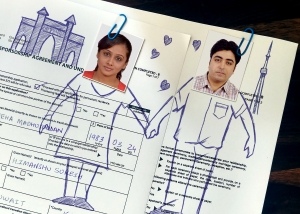 Toronto based theatre company, Nautanki Bazaar is thrilled to present its debut production AN IMM-PERMANENT RESIDENT. Written and performed by Neha Poduval & Himanshu Sitlani and directed by Miquelon Rodriguez, AN IMM-PERMANENT RESIDENT will premiere at the Theatre Centre as part of the RISER Project 2020 from April 12-19, 2020 with the Opening Night on Monday, April 13 at 7pm.

A comedy infused with Bollywood elements, An IMM-Permanent Resident is a hilarious take on the mundane and tiresome bureaucracy of the Canadian immigration process, as experienced by playwrights and real-life couple, Himanshu and Neha. The play explores the irreverent journey to obtain Neha’s PR status, including the couple’s trials and tribulations as they put their hopes and dreams on pause (indefinitely). Through wit and creative banter, this fast-paced roller coaster transports us between Mumbai and Toronto, as Neha and Himanshu navigate the immigration system and ask themselves – is love worth it all?

AN IMM-PERMANENT RESIDENT will be Miquelon Rodriguez’s directorial debut. Based in Toronto, the actor/sound designer/musician is trained in Devised Theatre from York University and been an active industry veteran for 14 years. He co-curated both the Tiger Bamboo Festival and the Shen Development Series at Soulpepper Theatre and was the Apprentice Artistic Director at Factory Theatre between 2017-2019.

Himanshu Sitlani is a thespian, originally hailing from Mumbai.  Foraying his way into theatre as an actor, he progressed on to other creative aspects and dabbled as a Stage Manager and Producer over the years, eventually making his directorial debut in 2013. Since immigrating to Canada, Himanshu’s been immersed in supporting the creative arts, working as Patron Services Manager at Factory Theatre, while penning down his ideas towards his goal of creating a bridge between creative artists in Canada and India.

Neha Poduval is a trained actor, with several feathers in her creative hat, having performed in various theatre plays, corporate films and TV shows across India. A post-graduate in Acting from the reputed Film and Television Institute of India, she continued her association with the performing arts since moving to Canada. Neha has worked with DLT Theatre (The Stranger / Summerworks 2015, Off Limits Zone / Luminato 2016) and Alumnae Theatre (Granite Girls / New Ideas Festival 2017). Neha is also a certified Yoga Teacher and has been teaching Yoga across various studios, community and senior centres in Toronto.

Founded in 2019, the multicultural theatre company, Nautanki Bazaar was formed with a mission to present, promote, showcase and celebrate South Asian stories and artists.