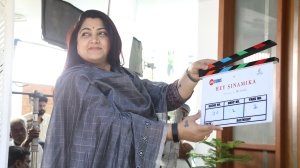 The film follows a couple, played by Dulquer and Aditi, and how after five years into their marriage, the fiercely independent woman has had enough of her doting and fussy stay-at-home husband.

Her strange and outrageous plans to separate leads to hilarious consequences.