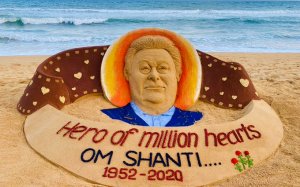 Rishi Kapoor died at the age of 67 in Mumbai on April 30. The actor took his last breath at 8:45 am in the HN Reliance Hospital, after a two-year battle with leukemia. He was admitted to the hospital on Wednesday morning.

Along with the actor’s face, Pattnaik inscribed the words “Hero of million hearts,” in his artwork on the sand. In his creation, the artist also added the words, “Om Shanti…1952-2020.”

Shri Narendra Modi, Prime Minister of India also  condoled the passing away of veteran actor Rishi Kapoor.“Multifaceted, endearing and lively…this was Rishi Kapoor Ji. He was a powerhouse of talent. I will always recall our interactions, even on social media. He was passionate about films and India’s progress. Anguished by his demise. Condolences to his family and fans. Om Shanti”, the Prime Minister said.