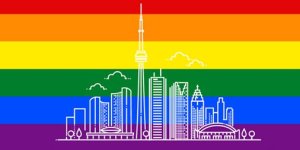 The City of Toronto is proud to announce that it has joined Pride at Work Canada, a leading national non-profit organization that promotes workplace inclusion on the grounds of gender expression, gender identity and sexual orientation. The City will now have access to resources and supports that can help create more inclusive spaces and contribute to deepening inclusion of Toronto’s Lesbian, Gay, Bisexual, Transgender, Queer, Two-Spirit (LGBTQ2S+) communities.

This is one of the City’s many initiatives in recent years to promote equity and inclusion both within its workplace and in the city of Toronto.

Earlier this month, the City proclaimed June as Pride Month and raised the Pride and Transgender flags at City Hall. Traditionally the Toronto Public Service (TPS) has participated in the Pride Parade and the City is encouraging the public and employees to participate in Pride Toronto’s virtual Pride Festival Weekend.

In December 2019, City Council approved the establishment of an LGBTQ2S+ Council Advisory Body to bring government, policy and community leaders together to focus on both service level barriers as well as structural and systemic challenges faced by LGBTQ2S+ communities. Applications for the Council Advisory Body opened on June 25 and will remain open until August 7. Toronto residents who are interested in providing advice on priority issues to support the elimination of barriers and inequities experienced by LGBTQ2S+ communities in accessing City of Toronto programs and services are welcome to apply at https://www.toronto.ca/community-people/get-involved/public-appointments/.

The City continues to support a workplace culture that recognizes LGBTQ2S+ employees as an important part of a diverse and effective workforce. Since 2004, City employees began organizing events and formally established the TPS Pride Network in 2010 to foster an inclusive workplace for LGBTQ2S+ members.

The City is launching a new Understanding Gender and Sexual Orientation e-learning for City staff, which outlines each employee’s role in building an inclusive workforce and offers practical tips to be an LGBTQ2S+ ally in daily life.

In addition, the City is also launching a new Accommodation Framework for Transitioning Employees, which is a new management tool that will support employees who are transitioning. This is accompanied by the City’s existing guidelines for accommodating gender identity and gender expression.

“The City of Toronto’s motto is ‘Diversity Our Strength’ and I am proud that the City is a new member of Pride at Work Canada. This membership, alongside the City’s numerous initiatives existing and new initiatives, further demonstrates our commitment to making the City an organization that proactively seeks to fully engage the talents, expertise, and contribution of our LGBTQ2S+ employees and residents to further improve our workplace culture for everyone and create equitable outcomes for all of Toronto.”
– Mayor John Tory

All set for Florida Fun!
The beach makes everything better-Florida here we come ⛱
The mercury has relented-perfect time to rediscover some amazing places
It's time for the sun, sea & sand!
Happy Vijayadashami🙏
Fabulous Vegas!