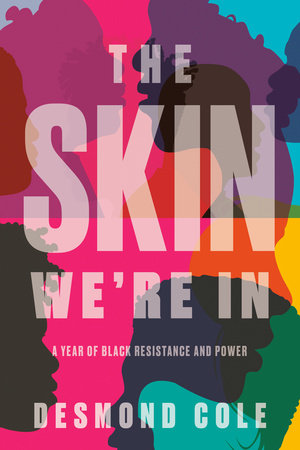 Desmond Cole has been awarded the 2020 Toronto Book Award for his memoir The Skin We’re In: A Year of Black Resistance and Power, published by Doubleday Canada. The announcement was made last evening at an online ceremony in conjunction with program partner, Toronto Public Library.

Cole’s memoir was chosen from a list of finalists that also included:
●       Frying Plantain by Zalika Reid-Benta (House of Anansi Press)
●       Dancing After TEN by Vivian Chong and Georgia Webber, project management and access support by Kathleen Rea (Fantagraphics)
●       In the Beggarly Style of Imitation by Jean Marc Ah-Sen (Nightwood Editions)
●       The Missing Millionaire by Katie Daubs (McClelland & Stewart)

Commenting on their selection, the jury stated: “A skillful blend of history and reportage, The Skin We’re In punctures any illusions Torontonians may harbour about race relations in their city and provides a local front-line perspective on Black Lives Matter. Desmond Cole describes his progression from journalist to activist on behalf of Toronto’s Black residents fed up with mistreatment at the hands of the police, lip service from politicians and media, and indifference from the community at large. Accomplished, timely and powerful, The Skin We’re In is a potent and urgent reminder that there is no place for complacency in the battle against racism.”

This is the 46th year of the Toronto Book Awards. Established by City Council in 1974, the awards honour books of literary merit that are evocative of Toronto. The annual awards offer $15,000 in prize money. Each shortlisted finalist will receive $1,000, with $10,000 awarded to the winner. This year’s Toronto Book Awards Committee was comprised of volunteer members Kate Cayley, Michael Fraser, Liz Howard, Ben McNally and Naben Ruthnum.

Desmond Cole is an award-winning journalist, radio host and activist in Toronto. His writing has appeared in the Toronto Star, Toronto Life, The Walrus, NOW Magazine, Ethnic Aisle, Torontoist, BuzzFeed, and the Ottawa Citizen. The Skin We’re In is Cole’s first book.

More information about Cole and his work is available at https://www.penguinrandomhouse.ca/authors/2134405/desmond-cole.

More information about the awards is available at http://www.toronto.ca/book_awards and on Twitter at @Culture_TO and #tobookawards.

“Congratulations to Desmond Cole for his Toronto Book Awards victory. I want to applaud all of the finalists for their moving words, which reflect the diversity and depth of the communities that call Toronto home.” – Mayor John Tory

Happy Navratri
Advertise with us and take your business to global audiences
Fall is around the corner?
Evening stroll ✨️
Picture yourself in the wild!
#TIFF22 has arrived!Discover the best in cinema until the 18th 🎬